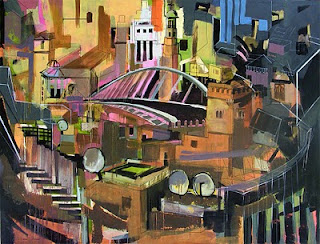 This is a larger "pintura seca" (dry painting) I did for the Ninth Biennial of Plastic Arts, City of Albacete in the middle of Castilla-La Mancha. Pintura seca refers to the fact you can paint at home and deliver the painting when it's done, dry, rather than paint outdoors in a set amount of time and give it over still wet. And because you have the time the painting style generally needs to be more figurative or conceptual, larger, and with a bigger cash payoff in the end if your work is selected for a prize.

This painting measures 2m x 1.55m and in order to transport it in the car I had to take it apart and reassemble it on site, which was a bit of an adventure doing on a sidewalk in busy downtown Albacete. The title of the piece is "Jamás se anuncian nada transcentendal," which translates roughly as Nothing transcendental is ever announced. I wanted to get across the notion of Spain being inaccessible to immigrants, and particularly Muslims a short ways off across the Straights of Gibraltar, despite Spain's rich Moorish inheritance of culture and past.