on July 05, 2010
I'm not sure how but I managed to win a third place (one of four) at the Ninth Annual National Fast Painting Contest in Yecla on Saturday - the first time I've ever won anything at a national-level contest. For the extremely young winner and photos of us painters going at it on the streets of Yecla, see laverdad.es (in Spanish). 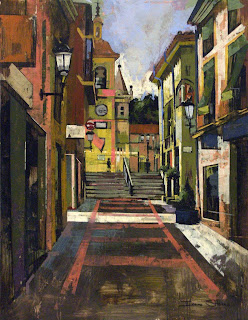 This was my first time experimenting with a dye called nogalina in Spanish, normally used to stain wood. It's made of walnut and comes in a crystal form. What I didn't know about it was that when you throw water on it, even if it's dry, it reconstitutes itself, making for a mess if you aren't careful. I was so frustrated with the painting at the end of the day I almost didn't hand it in. Glad I did. I won't complain about the money but in truth I was very, very surprised to have won anything.