Fast Painting in Sant Mateu and the Falla Barraca-Columbretes

on May 16, 2011
I competed in two paintings contests this weekend, on Saturday in the beautiful town of Sant Mateu about 130 km north of Valencia city, and on Sunday at the Barraca-Columbretes Falla House in the Cabanyal neighbourhood of Valencia.

I wasn't lucky in Sant Mateu as I was last year, but I had a fantastic time. The town is an aesthetic gem in the mountainous Valencian interior. The organizers invited us to a bounteous lunch replete with hors d'oeuvres, luxury sandwiches, dessert, coffee, and shots of herb liquor - all on the house. Als organitzadors, moltes gràcies! Hi vam passar un bon dia.

On Sunday, despite rain and cloud cover, I headed down the street to the embattled neighbourhood of El Cabanyal: embattled because the neighbourhood is historic - an old fishing village on the coast that the city and beach have oozed over; because Rita Barbará, the conservative mayor of Valencia, wants to pave the neighbourhood over with highway and gentrify it with luxury condos; and because Valencia's Roma community has called El Cabanyal home for decades.

I spent the day trying, unsuccessfully, to remain inconspicuous, but I was constantly found out and for most of the day had a crowd of curious onlookers around me, debating my work, telling me what I should add, asking me to paint them into the scene - though all warmly and jokingly.

After submitting my painting, it was a picnic of paella and beer on the street and an impromptu fair for the kids, which was great for my own kid who came along. Then at the end of the day, to my surprise, the jury awarded me first prize and presented me with a ceremonial cheque and trophy, a traditional ceramic tile mounted on a plaque.

Javier Mesa Reig has written an article about the falla contest which can can be found in Spanish here. 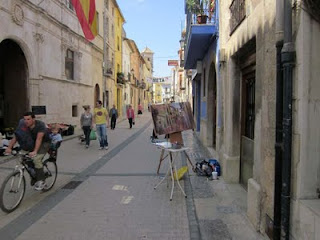 I painted in Sant Mateu on this busy street. 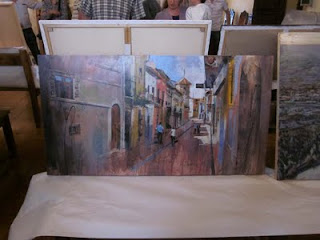 The finished piece at 2 pm. 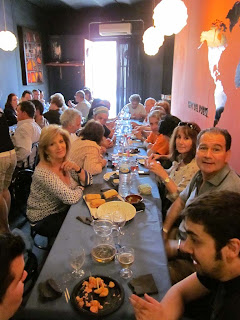 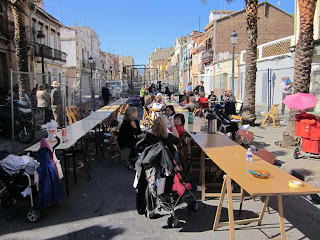 Wrapping up lunch in El Cabanyal. 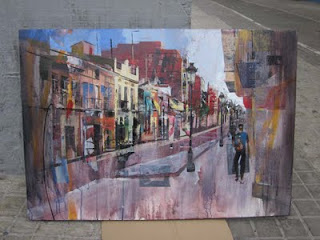