Fast Paintings in Alcázar and Noblejas

on July 18, 2011
I painted in two contests this weekend in the Madrid area and put over 800 km on a rental car - hard work in desert heat but fun, in our weird way of having fun.

The first contest was on Friday in Alcázar de San Juan (see my post from last year). It started at 10 p.m. sharp (literally, a gunshot) and ended at 2.  The awards ceremony was at 3. To my surprise, I was the first name among 16 equal prize winners of 400 euros to be called out. I'd barely squeezed into the crowd and took a seat. I jumped up, shook the mayor's hand, and give kisses to everyone else who was gathered around the mic.

We ate soggy bread and cheese on a bench after I'd signed the painting and pulled out of Alcázar at about 4.  We drove for an hour to Noblejas, Toledo, where we parked in a bush and tried to sleep in the crunched mini Toyota Yaris for a few hours. At 8 am I stamped my canvas in, found a shaded park from which to paint, set up so no one would take my spot, and then headed for a coffee at a "bar for farmers," where there really were just farmers. I started to paint at 10 and worked until 4, handed in the piece not entirely satisfied, and went for a swim in the town pool. The awards ceremony was at 7:30 and this time I wasn't lucky. In fact, no one from anywhere but the local area was.

We hung around and tried to peddle the painting off to a private buyer but on account of the heat, no one was outdoors. We hit the highway at around 9 pm and were back in Valencia by the early morning, zombies and drooling but happy to be back. 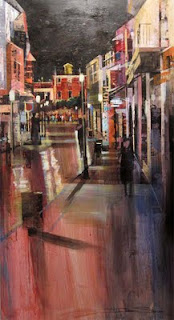 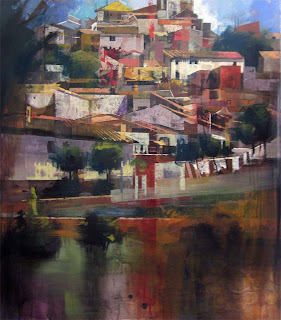 Here's half of the piece I painted in Noblejas, only half because I was told by an eminent painter during a half  hour critique of my work that I had crapped up the sky, among other things in the top half.
Fast painting 2011