Fast Paintings in Budia and Mira

on August 01, 2011
Back from another ambitious painting weekend, this time to Budia, Guadalajara and Mira, Cuenca - in all a 600 km round trip from Valencia. We spent a sleepless night in a noisy campsite in Sacedón near Budia and another almost sleepless night in a single-star motel built, shoddily, under a busy patio-bar, we learned after crawling exhausted into bed on Saturday night.

In any event, the trip was worthwhile.  In Budia no one even looked at my piece for more than a few seconds, but in Mira, while most painters were at nearby Sot de Chera where the prizes were bigger, I managed to win first place, even though I don't think I deserved it.

Along the way we managed to swim in a few different swimming pools and take in some breathtaking scenery.  The rolling fields of sunflowers alone are worth the trip out to rural Guadalajara and Cuenca. 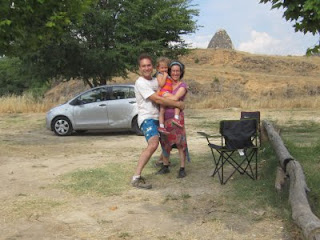 Our campsite beside "the old witch's house" in the background.  Afterwards we regretted telling Oriana about the witch, especially at night when she, Oriana, wouldn't sleep because the witch was waking up. 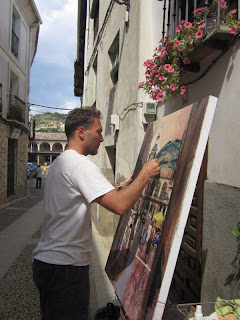 Working away in Budia. 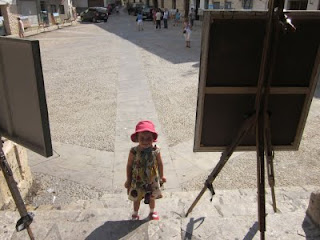 Oriana waiting for the prizes to be awarded in Budia. 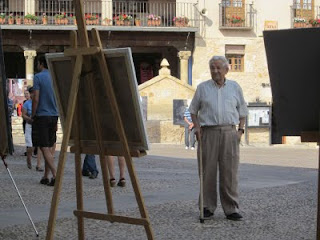 Old dude thinking, "Yo, you call that a painting, punk?" 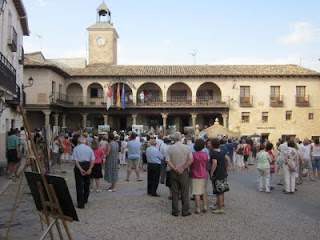 Announcing the prizes in grand style, from the portico overhead. 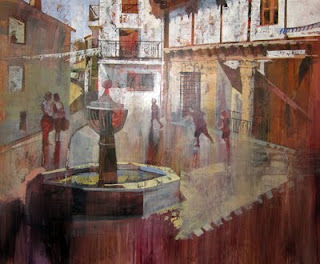 My painting in Mira. 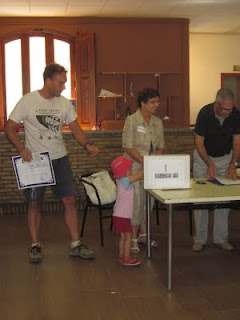 Accepting my award in Mira, and Oriana pestering/influencing the judges.

In other news, I've been upset lately with all the craziness in the world.  I nearly drove off the road yesterday when I heard that Hama in Syria was being attacked, again, by its own government, this time bombed!  I can't think of too many government that bomb their own cities.  I was in Hama in the mid-1990s and remember the warm faces and generous families I met there.  The famine in Somalia and other countries of East Africa is also dismaying, particularly when you think it isn't all the cause of natural disaster but poor government and lack of international support.  Then there's the mass killing by a neo-fascist in Norway, though lucid and in many ways a garden variety European xenophobe.  As the population in the world increases and neo-cons take over governments all over the world, is this going to be the new norm?
Fast painting 2011