"Give up one's being to the enterprise and see what lies within, whatever it is. Venture, don't look back. Do not tire. Everything is open."

The enterprise is painting. It's 1965, America. Motherwell launches a project to paint a 1000 pictures on paper, but he stops at 600, never to finish the project. The American sculptor David Smith, his friend in a long line of such artistic adventurers, has died.

If you've never heard of Robert Motherwell, he was 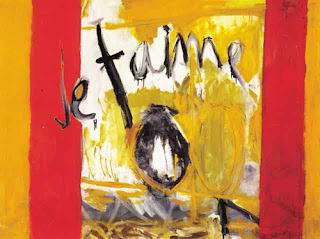 Motherwell would have liked his life depicted as tragic. He was an abstract painter, a founding member of abstract expressionism and its most articulate practicing spokesperson. While his companions - Rothko, Pollock, Gorky, Baziotes, Smith - threw their health before their art and in instances died tragically, he endured, and seemed to have kept his soundness and lucidity till the end.

Like all avant garde art, Motherwell's was a protest, in his case against "naturalistic descriptiveness as the most adequate vehicle of expression for the modern mind."

Motherwell wanted to inhabit the meaning of "modern," the essence of living in the present. He believed painting's job was not to "represent" the exterior world, but to express how it was felt and experienced.

"I can't help believing that what the art situation in America needs most is to get art away from the universities and museums back into the hands of painters and poets."

And: "In our society art is most integrated in persons under seven, and in patients in hospitals, and these two classes have by far the highest percentage of true artists."

Repeatedly he brings up that the true artist is not clouded with theories and techniques about what constitutes proper art. The true artist taps into a primordial self. Motherwell used free association, or psychic automatism, to get down deep.

I choked up on this passage where he describes his art as a moral struggle for an almost unattainable end: "The struggle has inexorable moral values - no nostalgia, no sentimentalism, no propaganda, no discourse, no autobiography ... no clichés, no predetermined endings, no seduction, no charm, no relaxation, no mere taste, no obviousness, no coldness; or, oppositely, for me, it must have immediacy, passion or tenderness, beingness ... detachment ... true invention and search, light, an unexpected end, mainly warm earth colors, and black and white, a certain stalwartness."

I loved reading Motherwell. He says he wrote reluctantly, out of a kind of intellectual responsibility. Only poetry could approach what he was trying to do. But his regular words navigate the hairball of arts writing with refreshing clarity.