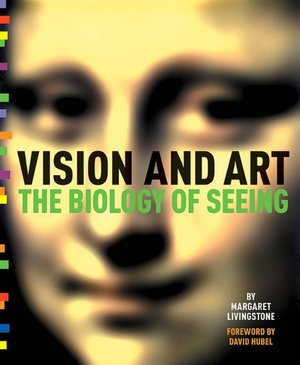 Before dismissing this book as obscure, consider how little we know about vision - both on the science and art fronts - and just how critical seeing is to most of us most of the time.

Margaret Lawrence does a great job of hammering home the difference between colour and luminance (or value). The difference is simple. Think of an image and strip away the colour. The remaining black and white is the luminance. If you've ever seen a painter squinting at a scene, it's the luminance they're after.

It doesn't make sense to me that the brain processes colour and luminance in different areas, separated in fact by inches, and that the luminance part is evolutionarily much older and important, but that is the case. The science says colour is associated with "what" things are, while luminance is associated with "where" things are situated in a field. You can kinda imagine how a sense of what leads to more refined identification and language, but how a sense of where leads to basic navigation and decipherment.

This has interesting results. Equally luminant colours generate a trippy feeling of vibration and motion. That's because the What system picks up things the Where system can't see.

Supposedly if you were to work entirely from the higher-evolved What system, you'd get something akin to cubism. "Drawings by patients who have suffered damage to their parietal lobes (the higher centres of the Where system) show spatial imprecision that is interestingly similar to Cubism," Lawrence explains.

Eliminating detail, oddly, also contributes to a sense of three-dimensionality. That's because blurriness makes it impossible for our brains to use stereopsis, the slight shift in perspective generated by the distance between the eyes. Go figure!

The point of all this is that every graphic, painting, and illustration - whether by an artist or advertiser - is an optical illusion, and if employed effectively a subliminal message. Like knowing how to read the label on a can of chili, it's probably worth grasping a bit of the decoding.