on May 26, 2013
Fine, so Spain's a mess. A lost cause. Untethered and spinning ever closer to the vortex that devoured the Third World, the banana republics, hell itself.

Talk to any numbers person and they'll tell you. The unemployment rate is approaching a third of the population. For youth it has tipped the halfway mark, compared to a quarter on average for other EU countries and just 15% for Canada.

The last time North America saw numbers even half as close, Wall Street had kerplunked, malnutrition had become reality, and the dominant political ideologies were fascism and socialism. What historian doesn't agree a major cause of the Second World War was the Great Depression?

So what's caused this crushing reality for Spaniards?

I once read that, compared to other Europeans, Spaniards spend the longest hours on the job but are the least productive per hour of work. I don't know, I see a lot of hard play but also hard work happening. And yes a movement is afoot to reform the siesta, among other measures, an unfortunate move in my view.

Then there's the story of heavy industry fleeing to China, as true in Spain as anywhere else in the West.

Corruption, too, is a factor. It's not news when the dog bites the man, but when the man bites the dog, so goes the saying. In Spain, it's not news when the politician embezzles thousands of euros, but when he doesn't. At the same time is the corruption any more than in, say, the US, where similar behaviour is formalized and legal and called nice things like private campaign financing?

Limits to corruption are as strong as the media reports it and generates public pressure to stop it. That's another problem. Imagine Canada without the CBC and its investigative journalists, without transparency laws and the Access to Information Act—and you have Spain. (To be fair Jordi Évole's Salvados on La Sexta TV has fired people up with some hard questioning. Think Michael Moore without quite the humour or edge, on mainstream television, and you get the idea).

Education? Okay, okay, the list goes on. It's amazing blood isn't flowing in the streets. A Colombian friend who knows a little about those things pointed that out to me.

On the weekend I participated in a painting contest in Tossalnou, so small it doesn't even have a Wikipedia entry. Happily, I won first prize, but that's not the point.

(But what the hell, I don't want to be accused of false modesty either).

Anyway, I arrived in the morning and parked on the edge of town. The streets were blocked to traffic for the contest. After stamping in and chatting with the organizers, I set up beside the only bar in town. The owner came out with a coffee and said I could use the washroom if I needed, which was, well, a relief.

I passed the morning in my usual state of frustration at the work not coming out as I wanted and shifting around to avoid the frying rays of the sun. I passed on a few offers of beer until I noticed breakfast was no longer being served and then caved in and accepted one.

At 2 p.m. I handed the piece in and ate a lunch of olives, paella, and wine. 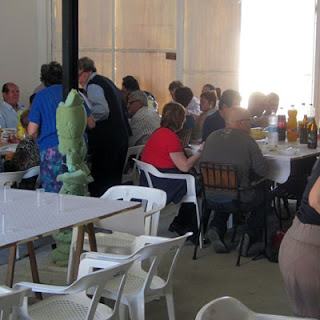 Here we are eating.


While we waited for the results we took in a game of pilota on the streets. 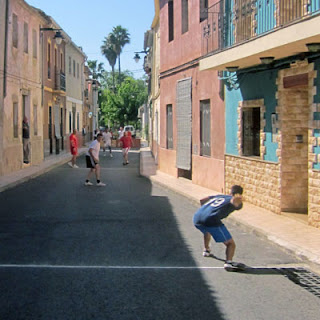 Dudes playing pilota. From what I could tell the game is a little like tennis, with similar scoring. Rather than rackets, though, players whack a ball back and forth with their hands, which are heavily taped up because they scrape the ground hard with them.

After the game, a fellow artist invited us for drinks at the bar. Along the way a woman pulled us into her house and showed us some artifacts she had dug up in her backyard. She thought they were from Moorish times. Another woman, an organizer, brought us into her house where someone was playing guitar and singing for a crowd. 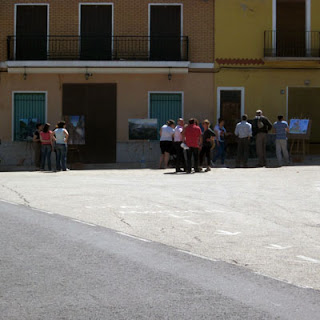 While the artists were at the bar, the jury deliberated the paintings.

Then the awards ceremony. Four significant cash prizes were awarded. And after that, more food, a "picaeta," a snack of tapas and wine, in this case featuring some amazing homemade meats cured by a guy from the village. 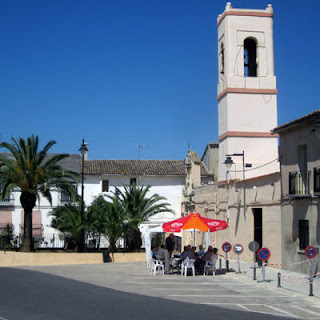 Did I mention all of this was free? And that the population of the town was, I don't know, 100?

I was happy on the ride back to Valencia but also confused. Sure from one perspective Spain looks all wrong, a mess on paper, lagging, even futureless. But from another perspective it has a wealth in warmth, spontaneity, and joie de vivre that is hard to quantify, and fiscally prudent, almost fully employed countries like Canada are hard pressed to rival.

Anyway, if you're still interested, here is the piece I painted. 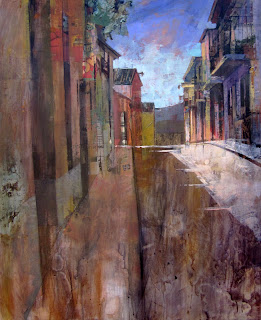