on July 08, 2013
It was 3 days of extremes.  Tropical downpours followed by sun amplified through moist air.  Long lulls peppered by condensed moments of visits and sales.  People that yawned at my art and people that said one day I'd be canonized an art maestro.  One guy said I could have taught Cezanne a thing or two about colour.  But he was wearing dark sunglasses. 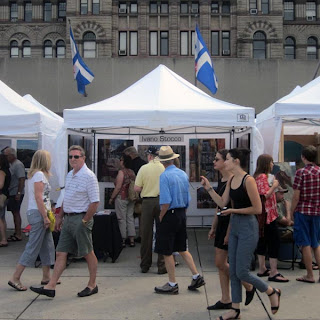 Here was my booth in front of Old City Hall at a rare dry, tepid moment on Friday.  I was lucky to be sandwiched between two booths that got a lot of attention.  That meant the spillover sometimes lingered in my space - sort of like a waiting room - until the other booths cleared. 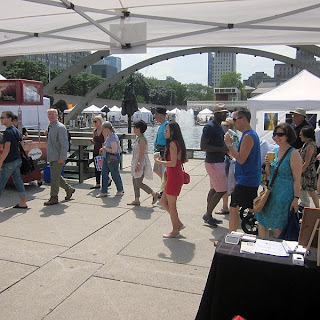 People watching from inside my booth.  The edges of the tent framed the scene nicely, like watching TV on a huge screen. 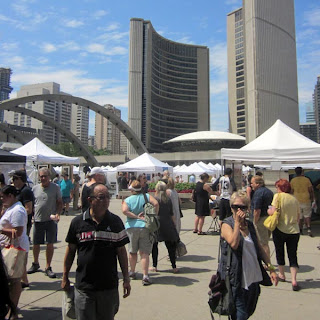 Outer Spacerly Toronto city hall, with the UFO in the centre and an alien or two I'm sure in those offices. 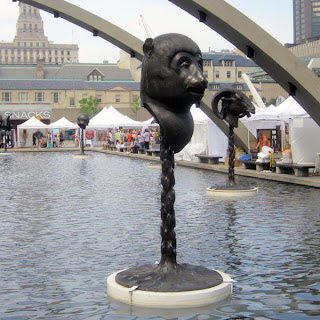 One of the highlights of the show was seeing these Ai Wei Wei sculptures.  The 12 animals of the Chinese zodiac, with their brows furrowed and mouths ajar, don't look happy.  Is the Chinese government, its repression of free expression and lack of democracy, somehow tempting fate?  Has the weight of tradition become too overbearing? 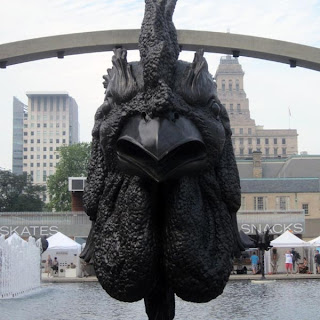 Directly in front of my booth, the rooster kept commanding my attention.  I wanted to feed him, pet him, sing him the chicken song.  Something so he'd stop making me feel, somehow, guilty. 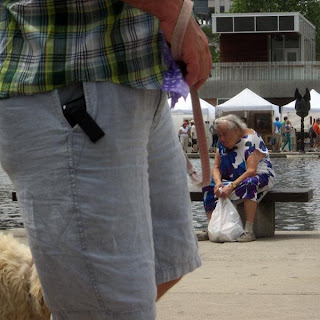 By the end of the day on Sunday, we were pooped, but satisfied pooped.

I'd like to thank everyone who visited, old pals and new, old buyers and new - there were tonnes of you.  I'd also like to thank the volunteers and organizers of TOAE, many of whom came around and I had the privilege to meet in person.  I can only surmise at the stress involved in mounting this show, pulling off the controllables without a hitch, and keeping it incredibly affordable and artist centred.  Finally, a big shout out to my family.  I couldn't have done anything without the truck, babysitting, muscles during setup and tear-down, and tag-teaming in the tent.  Thank you all!

Next up is Art on the Street in Guelph, July 13.  Hope to see some of you there.
2013 TOAE Toronto Outdoor Art Exhibition