So should depictions of landscape include humans? Believe it or not, I've been tossing that question around for years, and I've had some big arguments over it with fellow artists.

Throughout history, most representations of land don't seem to have included humans. Say landscape and what comes to my mind are fields, ponds, and mountains. Perhaps flanking trees, clouds on the horizon, the sun bright and shiny. Bob Ross.

We all know the Group of Seven with their scenes of vast, virginal nature. They made the wilderness and north a part of Canadian identity, but also, in stripping away people, especially natives, justified a form of colonial expansion.

There's something about depicting the outdoors and wanting to own it. In this episode of Art 21 I watched recently, featuring an artist I love, Rackstraw Downes, he lets slip while working en plein air, "I get very possessive of my places … I want them to myself." Later he mentions he's interested in big open spaces that are empty.


Technically, it's tough to paint humans convincingly, and even tougher to incorporate them in so they don't jar or look cartoony or look like they were painted by someone else with a different style. A figure always steals a lot of attention, even if it's pushed away to the sides.

Then there's the question of just what or who is the subject of a piece. Is it the drama of light? The design elements of the environment itself? Or is it the traces of human presence: track marks, scratches, or architecture?

Personally, I lean towards including humans. I don't know many spaces without them and my goal as an artist is to be real and true to my lived experience. 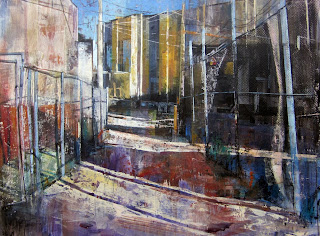 Here's a painting I finished a few months ago. I showed it once and then let it sit in my studio. Something bothered me about it and I think it was the emptiness. 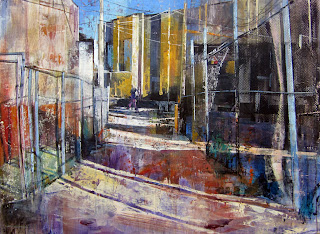 So I added a figure. Actually, "added" sounds easy. I sweated and struggled to get the few strokes just as I wanted them - clear enough to indicate a person and ambiguous enough to bring action and interest to him or her. 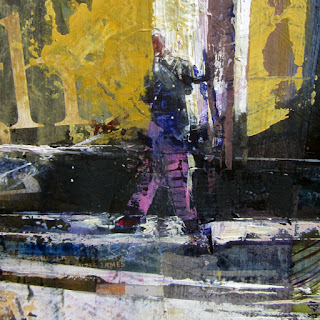 I titled the work "Fenceless End," which has a nice poetic ring to me, a quality of optimism. The title reminds me of the line "Jump and the net will appear," a familiar pep talk to any creator.