on September 05, 2013
I called this picture "Nest of Hollow Bosoms," which comes from Shakespeare's Henry V:

O England! model to thy inward greatness,
Like little body with a mighty heart,
What mightst thou do, that honour would thee do,
Were all thy children kind and natural!
But see thy fault! France hath in thee found out
A nest of hollow bosoms, which he fills
With treacherous crowns

The painting doesn't have a lot to do with war (in Shakespeare's case, preparations for an invasion of France, which would ignite the Hundred Years' War), except that as I painted it Syria, a country I've visited, was on my mind.

Rather the line "nest of hollow bosoms" haunts me in another way. A nest should be home and the bosoms (read bodies) that inhabit it should be nurtured by it, full of heart and life.

In the painting, however, the lone bird on the wire is at home - or at least a familiar sight - but also far from the trees we associate with wildlife. It is somehow unnatural, misplaced, away from the busy street and safe but now surrounded by empty garages, the way a child in a large suburban park might have the grounds to themselves. And yearn for a riskier, less certain life. 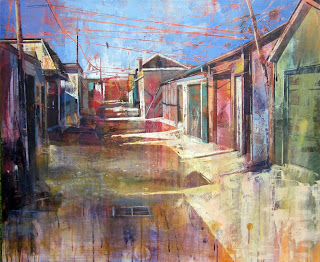