on November 19, 2013
It's been a long time since I've seen an arnie or even heard the word, but when I was a kid my dad used to bring the shiny metal balls home from work to play with. 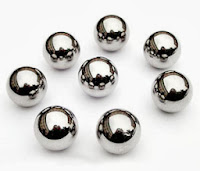 They were great for marbles or jacks because they could smash through anything.

I've been interested in metal ever since.  A few months ago I painted on it for the first time.  I began with steel and learned how to attach a wood stretcher to it.  Then I rusted the surface using various concoctions in order to create interesting abstract patterns.  I locked these in (well, sort of) using a rust neutralizer and potion that took ages to research.  Finally, I painted on top of this patina and, when that was done, varnished down everything.  A long process but I was happy with the results.  At least until the rust started to eat through from underneath and to turn everything a uniform coffee brown.

I haven't given up on steel but because I now realize the only option is to use auto body materials, and that will require a bit of an investment in cash, I've switched to aluminum, a metal that does not rust.

Here's my first stab at a piece I don't mind showing.  Unfortunately, the camera doesn't pick up what I think is the best part, the sky.  I've left the metal bare there and polished areas so they refract light in different directions.  The scene jitters and shines, especially as you move around it. 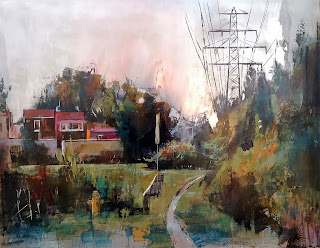