on December 04, 2013
If you're a big nerd like I am and spend time looking up word etymologies, you'll see that "contretemps" comes from fencing originally. It's a kind of psyche move meant to provoke a counterthrust from an opponent. It also means an inopportune occurrence or small disagreement. Curiously, in Spanish it's a setback. And literally, from the French, it translates as "against time."

I used a couple of source images for this painting, one of a woman bending over and talking, seemingly, to a leaf, which I replaced for a squirrel.  I then put the bag in the woman's hand, as if it were contested by the squirrel, and put both lady and beast in a setting that mostly came from my head but looks very much like the laneways near my house.

The painting will be hanging in Strata Gallery in Elora until December 15. 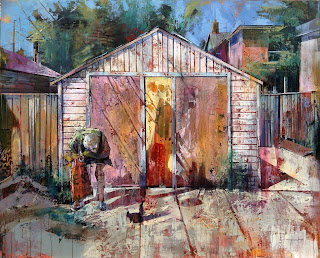