A first sculpture in cement and pique assiette 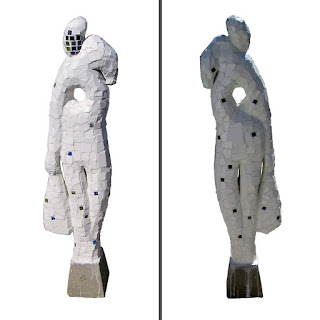 For months I've slogged away on this sculpture.  She's around five feet tall, weighs a tonne, and can go either indoors or outdoors, seated on the ground or sunken into it for greater stability.

It was the first time I'd worked in this way with cement and stucco, though the materials were familiar from my days as a plasterer, and right away the chapped hands brought me back.

It was also the first time I'd worked in pique assiette, shards of broken tiles and plates, which I somehow associate with "the people," perhaps because the technique is so central to the architecture of Gaudí, the Watts Towers, or the play structures of Niki de Saint Phalle.

Weirdly, the figure is that of a person rambling down a sidewalk on a sunny day, only rather than their body I used the shadow they cast as the basis for the form.

My grand design is to one day own an industrial space where I can paint, sculpt (especially in metal, like Albert Paley), produce beautiful functional objects (as did William Morris in the 19th century), train young apprentices, and offer classes.