on August 08, 2010
Beneixama, five years ago, was my first ever plein air painting contest, and this year was my fourth time painting in the village. Every year it's in August, so very hot, and runs the entire day from early morning to nighttime, when the town comes out for an exposition of the paintings in the town square and eats the local favourite, blanc i negre, "black and white," or iced coffee with "meringued milk," a kind of ice cream I've never had anywhere but Spain. Though I've never managed to win a prize in Beneixama, I've always been treated well as a painter and in the last three years sold my work.

This year with the whole day in front of me, a spot I thought would be shady all day in the morning when cool was everywhere, and a house to go for lunch, I painted a scene that was, in retrospect, on the complicated side. I think I finish it with just about every detail and was more or less happy with the result. 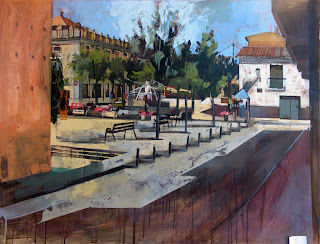 On the left, folks, you'll see a Moorish tower that the city restored recently, followed by the city hall to the right, the main square with fountain and potted plants, ample greenery, and a telephone booth word has it was the first phone in town. Acrylic on panel, 116x89cm. 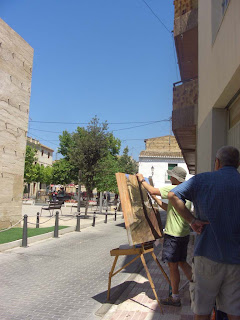 An action shot. It's about 11 am. Note the shadow, creeping not over me but in my direction and away. In the painting the shadow on the street is invented to make the painting more interesting, among other points of creative license. 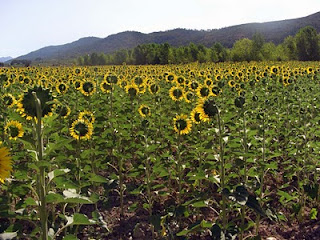 Watching sunflowers wake up on the outskirts of town. 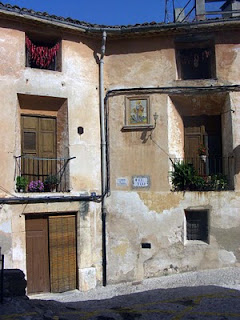 Fiery peppers being eyed by a saint in nearby Bocairent.
pintura rapida