The best part about Vegas is leaving. We made neither gains nor losses, because who can stand sitting in front of a pinball machine on speed and steroids anyway.

Desert, lots of it, and grey and monotonous through Nevada and the northwest corner of Arizona. Then Utah and it's all thick slabs of cheese and chocolate with a sprinkling of green in the valleys.

In Zion National Park, Utah, it's so hot setting up camp, especially pumping up the new blasted inflatable mattresses, I get dizzy.

The deer aren't too smart - they come right up to you.

We explore The Narrows, a deep crevice cut through the mountains with a river in it. Nothing like wading in cool water to freshen the whole body.

At night, a ranger talk on astronomy. We see Jupiter and its moons through a telescope. Conclusions: we're minuscule as a species, not even a single granule in the whole world of sand and dirt and dust combined. But we don't know it because we’re polluting the sky with artificial light, making it harder and harder to see even the biggest, most obvious stars. Did you know, artificial light so corrodes melatonin and warps the circadian rhythm that it's carcinogenic? Goddammit, even that! 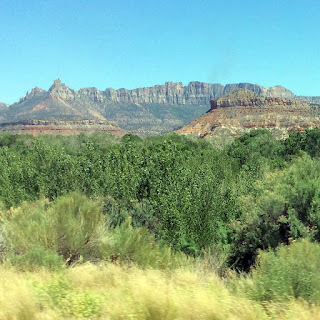 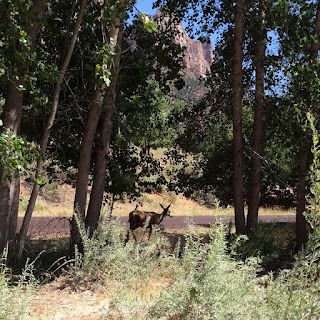 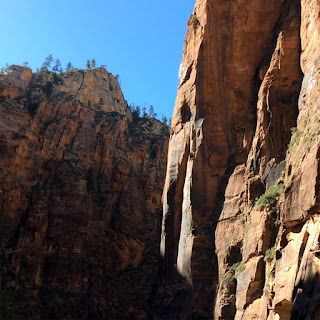