L.A. to Toronto Roadtrip Notes: Day 9 and 10, Nebraska and Iowa

Geographically, the skies are as vast as they say and the fields of corn and cattle pasture a never-ending emerald smear. 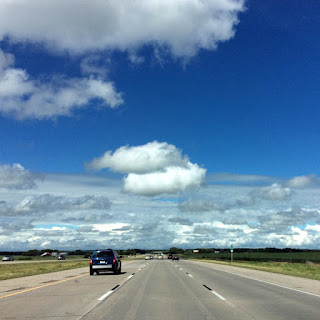 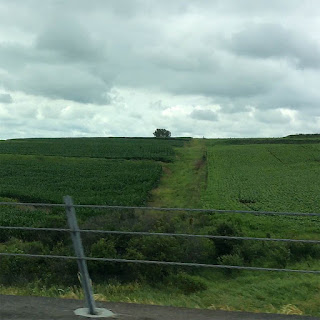 It's dangerous to generalize but the people seem humbler, as if they haven't forgotten what community is and the small rituals required to maintain it. I go for a run to shake off the car legs and every single person I pass says hi. No one wears sunglasses and there doesn't seem to be a gym or organic grocer in sight.

Of course, these same friendly folk voted overwhelmingly for Trump, at least outside of Lincoln, Omaha, Des Moines, and the other major cities (though curiously, they aren't as in your face with the flag and make America great garbage as Californians).

Then going on the leaflets in rest stops and every billboard trying to pull you into a local source of pride, they're smitten with Lewis and Clark, the Mormon trail, the California trail, pioneers, and every other force of Manifest Destiny, to the expense, I would say, of other histories.

I did a little research and found that at one rest stop outside of Omaha, on the Big Blue River, a tornado hit the camp of Standing Bear and the Ponca tribe in 1877, killing Standing Bear's daughter. The tribe it turns out was heading for Oklahoma because white settlers had dispossessed them of their land in Nebraska, and along the way a quarter of them died. When they tried to return to their homeland two years later, soldiers from Fort Omaha arrested and imprisoned them on the very spot on the Big Blue where we stopped.

Standing Bear would fight his imprisonment and eventually win. The ruling was the first time in U.S. history "that an Indian was a person within the meaning of the law," explained a plague, at the end of a path behind other plaques honouring American soldiers who fought in Vietnam, the sacrifices made by pioneers to break the land, and something about Purple Hearts, in case your patriotism was beginning to waver. 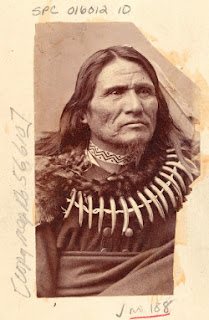 In Iowa, we stop on the eastern extent of the state, just across the Mississippi from Illinois, in Davenport. It's pouring rain but we make an effort at least to see the Mississippi, which is an inch or two from overflowing its levees. It's the first time we've seen the huge river, as vital as it is to the settlement of North America (just take a look at this map of light pollution, with the Mississippi splitting the two distinct zones). The river makes a big impression. 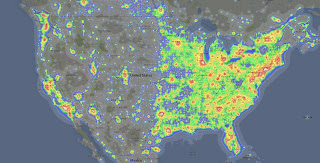 Downtown Davenport, meanwhile, feels like the rust belt, or the outer fringes of it anyway, a little like Southern Ontario. Rough but homey. We J-walk for the first time not worried that a cop will arrest us. And we stand in centre medians while cars keep going right by, not confused in the least at the sight of pedestrians. 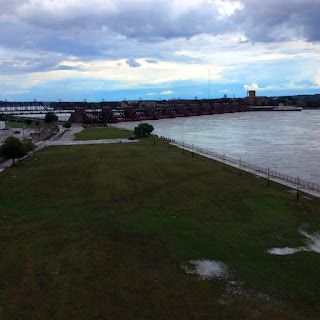