The Desert Within - SOLD

on April 17, 2018
I was in the desert on some federally unrecognized indigenous group's land, with the suburbanites who've bought the story about dropping out, living minimally, and self-reliance.

I was trying to absorb the sacred essence. Remember Carlos Castaneda, the Teachings of Don Juan?

That week's movie was Zabriskie Point and I was dying to roll around naked. But it was torchy, everything sandpaper. The sun on the moon. And what the hell was that blob of black spikes anyway?

I sauntered round the back way to the perch and gazed down at the rock climbers with their ropes and puffing faces come up the hard way. One dude made it up and I offered my hand to help him over a final hump, but he refused, proud. Said something, none too pleased but still chummy about a "muscle-fuck" and a "beach bash," and I said, "yeah, man," in a commiserating way.

Then I got into the position of the vajrasana and took out the ayahuasca a hippie with an army bumper sticker gave me near the gas station.

And that was when the vision came: a budding cactus, southern cholla with an aspect of northern sumach. Dry-iced and shattered. Suspended in the air against an oozing sky and disjointed land.

Come on, come on, my kid wakes me. You're just joking.
SOLD

Mixed media on birch, 36" x 48" - SOLD I've been so satisfied working away in my old studio in Canada that I haven't been photographing or posting any of the new work. So here's one, "Hoarding and Boarding," which I half started I don't know how long ago, threw in a corner, and just now found and finished. I think it was based on a quick sketch and photo I took somewhere in Toronto. It caught my eye because it speaks to what's become the default discussion around here, construction, and gentrification. I almost called it "Gentrifiers Against Gentrification," but thought I'd save some slacks from getting in a swivel. Typical range of comments: "I like the new construction. It adds life. The rednecks leave." "I hate the new construction. It brings in hipsters and traffic." "It's construction on top of construction. Buildings, yeah, but also new pipelines and cables. Chewed and blocked off road 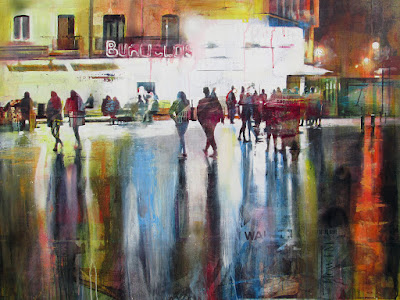 Loops of dough deep-fried in grease, served under fluorescent lights, amid circus-like trinkets and billows of smoke. A cultural institution unique to the Hispanic world, especially around Christmas. So it was I stood outside a train station, maybe the most popular and democratic of places in Europe, and took notes in a sketchpad, marvelling.  Valencia's daytime light is well known, but its nighttime gleam—not to mention its general busyness and revelry into the darkest hours, like a gathering of bats—has always fascinated me as much. This work comes in two versions. You can see a time-lapse video of me making the second at https://www.instagram.com/p/B8cCdvGHbvE/ . " Buñuelos (No. 1)," m/m on canvas, 48" x 36". Available at Canvas Gallery , Toronto. " Buñuelos (No.2)," m/m on canvas, 48" x 36". With me in my California studio.

Together (No. 19) Original and Reproduction

"Together (No. 19)," mixed media on birch panel, 36" x 48" I was at an art show in Phoenix, Arizona a few months ago and, wandering about, squinting at the light, I stumbled upon this scene. It was the long shadows and so many backs to me, crowding in with those glowing silhouettes which caught my attention. I happened to be carrying a journal and iPad and cracked out both to capture the fleeting moment in the middle of the street. I was crouched over and I had to catch a poor fella with a cane who didn't see me and stumbled over my back. The other day I heard a neuroscientist on the radio. He was saying that while he knew nothing about art, he could always pick out who the artists were when he ran tests of eye movement on random samples of the population. The artists' eyes looked at things, in patterns, other eyes didn't, he claimed. "They seem trained in different ways." Who knows, but it wasn't till I was done working and walk